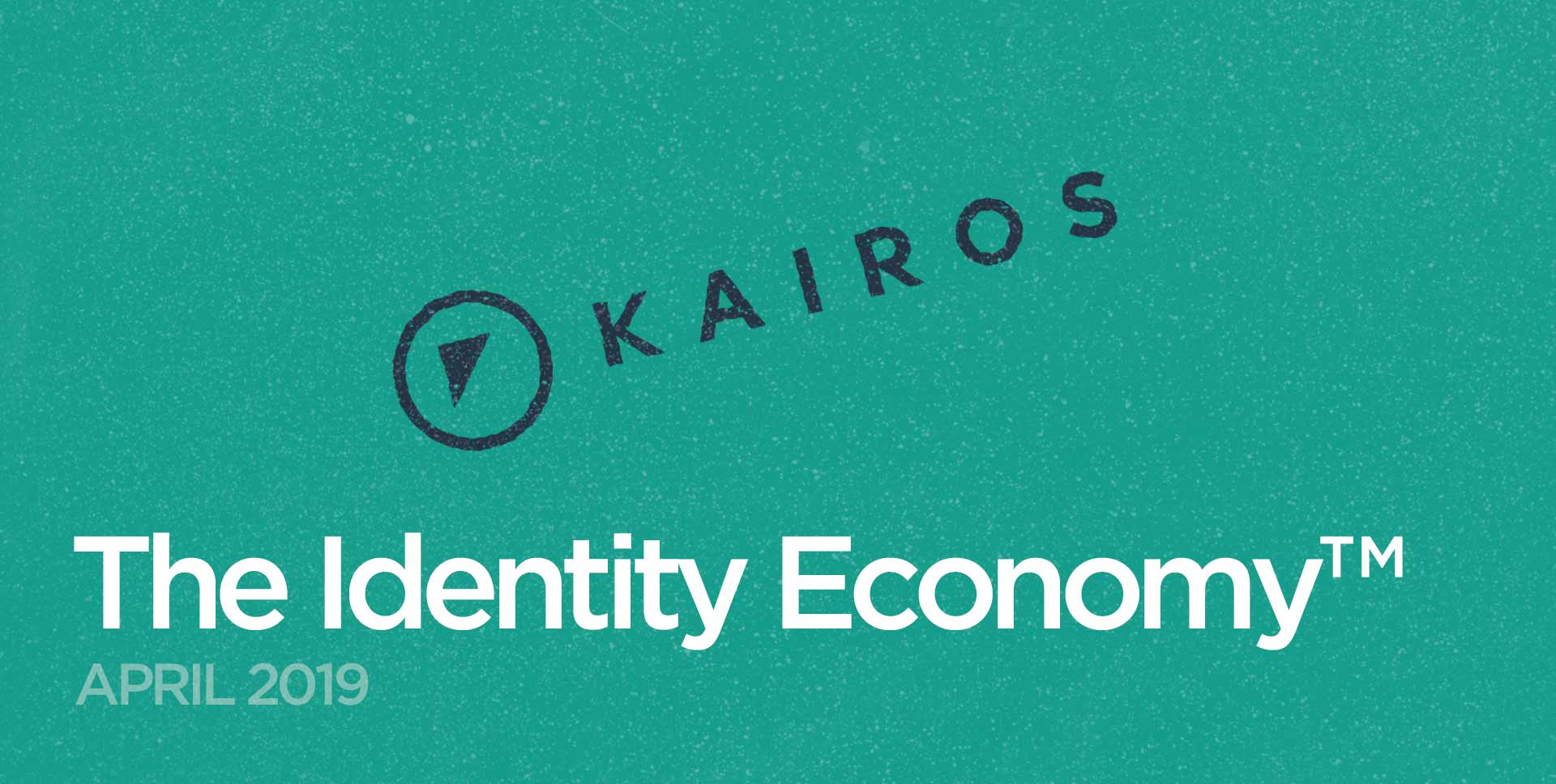 Every month, we’re bringing you the best news and views on the most compelling topic in technology today—Identity. All lovingly curated by the team at Kairos.

First, some housekeeping: This is the inaugural episode of The Identity Economy™ since moving off of the Medium platform. Why did we move? Well, we realized while Medium is great for amplifying articles, ultimately we wanted to make 'The Identity Economy™' synonymous with Kairos. That meant publishing it on our homegrown blog. #ContentMarketing etc.

So, yeah, welcome (back), thanks for joining us. You can expect the same hot-takes, oddball stories and snarky insights on all things face rec tech and modern identity culture. For the uninitiated, prepare yourself by pouring over our archived episodes.

Now, to the links…

Ready to Meet Your (Sorta Creepy) Digital Avatar? Nah, Us Neither.

Excerpt from an article by Amir Bozorgzadeh in Venture Beat.

“Back in August I explored the profound role that avatars will play in shaping our experience of immersive worlds in VR. I discussed how virtual embodiment will stretch our sense of self on multiple levels, be it physical, physiological, or psychological. While it is not at all an exaggeration to suggest that avatars will shift our conception of identity and self-expression into uncharted territory that we cannot, as of yet, readily comprehend or fully appreciate, that is only half the story.

Avatars will not only be our vehicle for entering immersive worlds, but also the doorway through which a new breed of intelligent characters will step through to greet us and guide our navigation through it. Let me explain how.”

Avatars will be our guides in immersive AR worlds -- and brands need to be ready https://t.co/jO59zZS6me by @whiteboxamir

Good Luck Trusting Each Other Ever Again.

Excerpt from an article by Christopher Mims in The Wall Street Journal.

“When you’re logging in to a Starbucks account, booking an Airbnb or making a reservation on OpenTable, loads of information about you is crunched instantly into a single score, then evaluated along with other personal data to determine if you’re a malicious bot or potentially risky human.

Often, that’s done by a service called Sift, which is used by startups and established companies alike, including Instacart and LinkedIn, to help guard against credit-card and other forms of fraud.”

I wrote about trust scores, which are like credit scores, only they're secret and not transparent and not specifically regulated, and will probably lead to good times if anyone ever proves they are potentially discriminatory https://t.co/i6nqPgDIzR

Netflix and Steal. Seriously tho, give us ya login deetz.

Excerpt from an article by Peter Kafka and Rani Molla in Recode.

“Odds are very good that if you’re reading this, you watch Netflix. Are you paying for Netflix? That’s another story.

The streaming service says it has at least 139 million paid subscribers around the world. But there are decent odds that many more people are watching Netflix and letting someone else pay for it.

Odds are very good that if you’re reading this, you watch Netflix. But are you paying for Netflix? That’s another story. https://t.co/IVsf768arv

“Hey Alexa, What’s the Definition of ‘Invasion of Privacy?’”

Excerpt from an article by Matt Day, Giles Turner, and Natalia Drozdiak in Bloomberg.

“Tens of millions of people use smart speakers and their voice software to play games, find music or trawl for trivia. Millions more are reluctant to invite the devices and their powerful microphones into their homes out of concern that someone might be listening.

Amazon.com Inc. employs thousands of people around the world to help improve the Alexa digital assistant powering its line of Echo speakers. The team listens to voice recordings captured in Echo owners’ homes and offices. The recordings are transcribed, annotated and then fed back into the software as part of an effort to eliminate gaps in Alexa’s understanding of human speech and help it better respond to commands. “

Amazon has thousands of people around the world transcribing and annotating Alexa users’ voice recordings, working to fix gaps in its understanding: https://t.co/oOIuC5BCeL The voice assistant relies cutting edge machine learning tech. But it has plenty of human helpers, too.

Excerpt from an article by James Cook in The Telegraph.

“Facebook has developed a plan to turn its users into the stars of advertising campaigns through new technology which can automatically scan people’s photographs and identify which products are featured in them.”

Facebook plans to pass your photographs to advertisers and make users the stars of online ads, patent reveals https://t.co/0Qhw1AR2P3

BREAKING: The News Has Feelings Too.

Excerpt from an article by Rick Edmonds in Poynter.

“A year ago, without ceremony, The New York Times piloted ad placements based on the emotions certain articles evoke. “Project Feels” has now generated 50 campaigns, more than 30 million impressions and strong revenue results (the Times declines to specify how much).

So it’s a hit, and the sort of advertising innovation based on data science, artificial intelligence and algorithm that the Times expects to scale up — and that other news organizations are exploring."

The New York Times sells premium ads based on how an article makes you feel https://t.co/pKLBbFdxB6 pic.twitter.com/FXy4Yrkbs1

Excerpt from an article by James Wellemeyer in MEL Magazine.

"Priya Mittal, a 19-year-old freshman at Brown University, lives for spontaneous FaceTimes. She’ll be at the library in the middle of her Intro Economics problem set, or in her room changing into her pajamas after a shower, when a friend will surprise her with an out-of-the-blue iPhone video chat invitation. Even if she’s still wrapped in a towel, she’ll pick up — that’s all part of the fun.

It’s also a generational thing. That is, for groups of college students and high schoolers, texting is out. Their go-to method of communication is FaceTime. 'If you want to say something to someone, you don’t call them on the phone anymore,' says Kyle Baker, a 21-year-old junior at George Washington University. 'You’ve gotta see their face.' Baker says he FaceTimes his friends 'all the time,' and doing so is 'totally normal'."

Thanks for reading this month's 'The Identity Economy™'—stay tuned for the next episode, in the meantime if you stumble across a story you think we need to cover, throw us a tweet @LoveKairos.