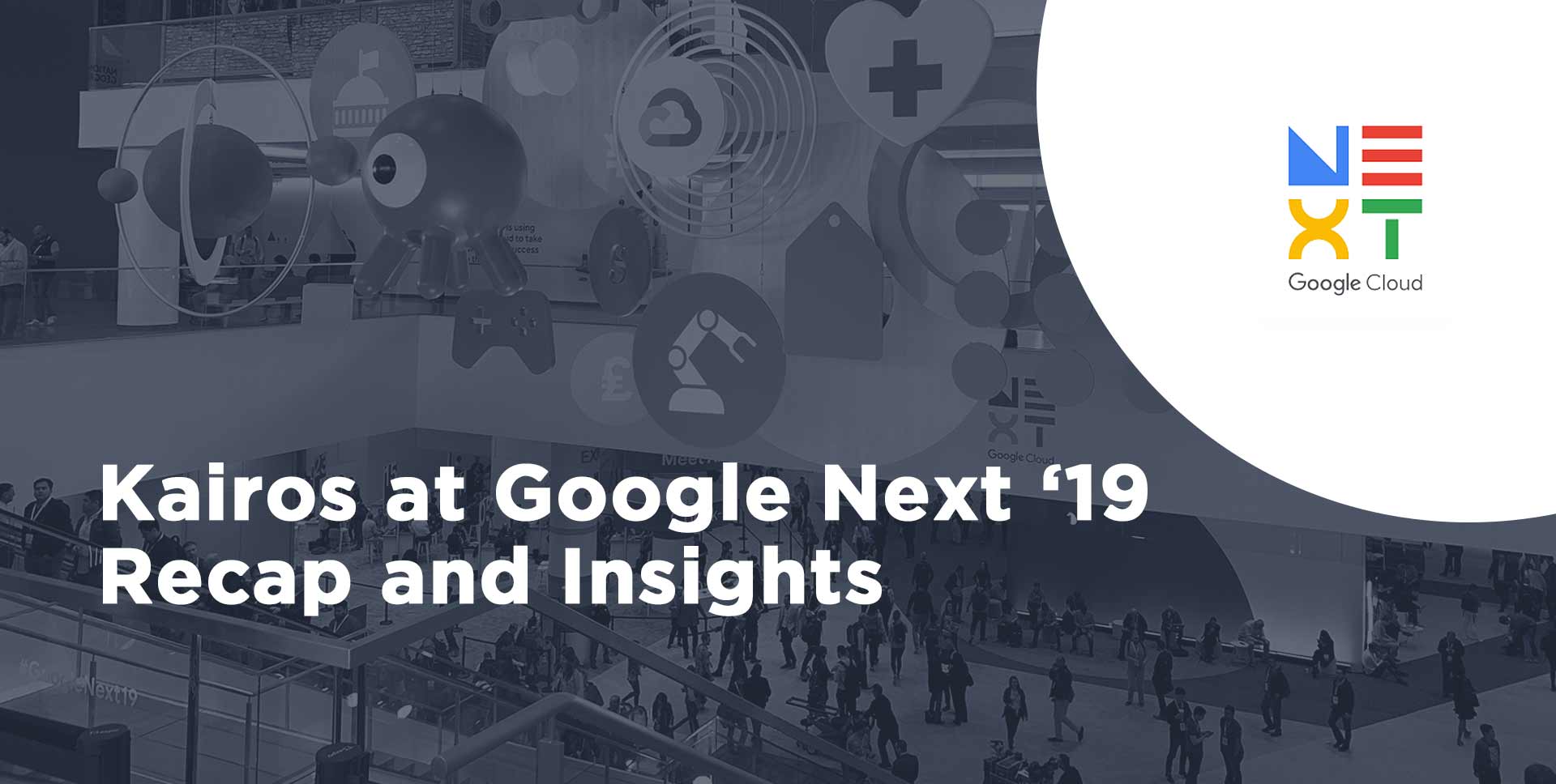 Google Next is Google’s annual conference focusing on their cloud computing offering, Google Cloud Platform. Thanks to our great Google Cloud account team in Miami, we were able to attend this year and learn about Google’s new announcements, network with experts and other peer companies, and get some in depth knowledge about GCP.

For a little while now we have been working to migrate our cloud from Amazon Web Services (AWS) to Google Cloud Platform (GCP). We’ll be providing more details of the move, our learnings and other interesting tidbits of our journey in a future post, but for now let’s talk about the Google Next conference.

But first, look... I met my IT hero! Thanks for being so generous with your time, Kelsey ?

TIL: Google Next is a *big* conference.

This was my first major cloud provider conference. I’ve been to some of the smaller regional AWS events but nothing of this scale before. There were 35,000 attendees this year at Google Next. This compares to the previous Google Next conferences that had 10,000 two years ago and 25,000 less than a year ago. The event was held at the massive San Francisco’s Moscone center, both North and South sides as well as various other venues around the local area such as the Palace Hotel, Metreon and Intercontinental Hotel.

Every session I attended was packed and had a line of attendees waiting standby to get in. If you’re planning on attending next year, make sure to use the online schedule builder and register for all the sessions you want to go to before arriving. Thankfully, because I had registered, I was always able to skip all the lines and get a great seat, VIP style.

In addition to the technical sessions, there were centers to experiment and play with various Google technologies as well as a vendor expo hall. The expo hall had hundreds of vendors ranging from Accenture to Zoom. The sheer number of people made it a little difficult at times to get around the hall, but I was still able to meet with a handful of vendors and of course get some cool swag. Finally, Google held a kick ass concert for attendees featuring DJ Marc Ronson of Uptown Funk fame, and Gwen Stefani.

The main takeaway I had leaving Next was that Google is going after the enterprise and they are going after it hard. They have a huge chunk of the smartest engineers in the world and have figured out better ways to do a lot of what we do day to day in IT, so why doesn’t everyone just run the way Google runs? I can see how it could be frustrating when you have a great solution in your pocket but you can’t get anyone to listen.

Google Cloud’s new CEO, Thomas Kurian, former Oracle exec, seems to have brought a new focus and direction to the business in a very short time. From what we heard, Kurian has only been on the payroll for around 10 weeks, yet has already met with hundreds of Google customers. Leading by example is key here. Google’s main rival, Amazon Web Services, is known for being fanatical for listening to their customers (not this kind of listening mind you) and responding with their roadmap. Taking a page from AWS’ playbook seems to be the right play here.

Let’s not forget that AWS is still the 100lb gorilla in the space. Google has a long way to go to even show up in AWS’ rearview mirror. As hard as it is to believe, CEO Kurian stated, 80% of the IT workloads still have not been migrated to the cloud. Google thinks they should be able to land a good chunk of that as well as pull some of the 20% over to their side. What they did this week was to reassure not only that they are listening, serious about the enterprise and here to stay, but they also brought a huge number of partners forward to show that by choosing GCP you aren’t alone and are in some very good company. Companies like Phillips, JP Morgan Chase, CBS, Kohls, Target, and UPS were showcased heavily.

Throughout the expo hall, Google featured both their partners and their own solutions as applied to a number of verticals such as media, finance, retail and transportation logistics. This was repeated in a number of sessions I was able to attend, for example seeing how Target took advantage of Google Cloud’s world class network backbone, or how CBS Interactive was using Google Cloud AI tools to build an automated pipeline to automatically caption, tag and analyze thousands of hours of video every day for CBS’ News, Sports and Entertainment divisions.

Google is instead partnering with those companies (and others) by making them first class citizens inside the Google console.

"Anthos leverages open APIs, giving you the freedom to modernize any place, any time and at your own pace." Get to know our new hybrid cloud platform, announced at #GoogleNext19 → https://t.co/BugDvJYPOk pic.twitter.com/VyE5V8wYnx

Anthos: Kind of a big deal

Finally, I would be remiss if I didn’t mention the biggest announcement, Anthos. Anthos’ tagline is: “Anthos (formerly Cloud Services Platform) lets you build and manage modern hybrid applications across environments.”.

What does that mean? Simplified, Google is bringing what they have built on GCP to your datacenter. Application modernization the theme here bringing its customers one consistent platform from end to end regardless of whether you’re running on premises or in the cloud.

This is a real bridge bringing Kubernetes, and Google’s policy management, monitoring and deployment. Definitely a very well thought out gateway drug for those 80% of enterprise workloads that are not yet on the public cloud. Anthos starts at $10k per month with a one year commitment for 100 vCPUs, so it’s not for your average startup, but those startups are already running in the cloud.

TL;DR Google is going after the enterprise with a renewed customer centric focus.

--
I hope you enjoyed this high level overview of Google Next. Stay tuned for my next article, I’ll go through some of the key sessions I was able to attend.